While I’m not referring to one of the few non-fiction books by Stephen King although I’ve read it more than five times, I am referring to one of my many hobby projects which is trying to get published in a Sci-Fi magazine named Analog Science Fiction.  I’ve almost finished my second story which I plan to submit to the magazine.  I’m constantly surprised at how the story evolves and takes a new direction that I couldn’t have predicted.  I don’t know that this will be the one I get published and mostly I’m not worried whether it is accepted or rejected so long as the story turns out well.  The format is short story so I can collect ideas quickly and submit them without having as much time invested as say a novel.

I’ve developed a lot of tricks during my writing journey and I thought some may have been original.  However, I’m finishing a 20 hour audio book named How Star Wars Conquered the Universe which talks a lot about how Lucas developed Star Wars ideas  and I realized my simple tricks are most likely obvious methods that many writers probably rediscover on their own.  Even so, I still enjoy reading how other people write and develop ideas and all their nifty little tricks and in my own simple ways coming up with ideas to try to pluck those pesky elusive ideas out of thin air.  One such example which is not really anything special now that I think about it is just keeping a list of interesting character names and character profiles.  I also keep other lists such as plot twists and potential settings or scenes for stories just to name a few.

I’ve also experimented with various pen and paper media (including fountain pens and ink bottles) and I have found that having many areas to sit and take in the scenery and sounds even seems to make a difference.  For electronic word processing, I’ve settled on using Ubuntu MATE Linux and LibreOffice Writer.  I have it installed on a flash drive so I can boot Linux and my writing tools on several different PCs including hybrid/convertible laptops without having to overwrite Windows that came installed on them.  Then much like with various pen and paper combinations I can pick whichever device is most convenient for a writing area such as my back yard wooden swing or a smaller metal frame swing in the front yard or a desk I have in my shop.  The flash drive not only has the tools I use on it but also saves my work.  I make routine backups of it so I don’t lose anything.  Since I don’t have wireless coverage in all these areas especially my metal walled shop, I don’t have to worry about having network access.    And while my work likely isn’t worth stealing, I don’t have to worry as much about someone getting their greedy little hands on my work before I release it since the flash drives are mostly isolated and I don’t usually have Linux connecting to the Internet.

Finally, I’ll end with an image that I found on unsplash.com that gave me the idea for this blog entry.  I included the photographer’s badge below the picture in case you want to check out more of her photos.  I’m going to keep trying to get back into a routine writing blog posts so maybe my next one will be right around the corner.  🙂 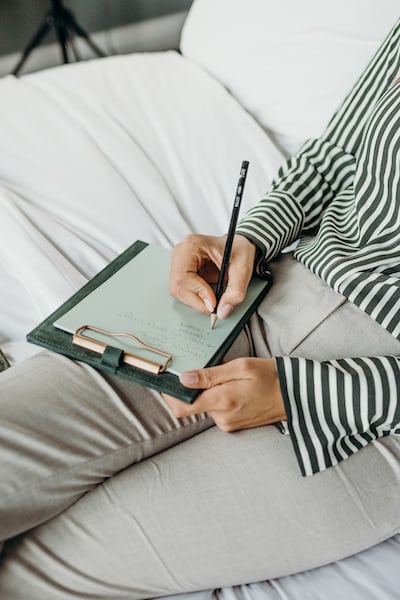